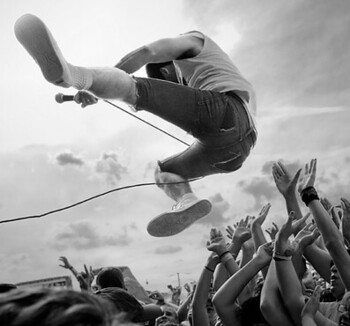 "Can the guitarist and the drummer do THIS ?"
Advertisement:

In a band, there's one thing that differentiates singing and playing an instrument: your hands are free if you're singing (and if you don't have hands, you can still sing). Such convenience allows a singer to play an instrument while also providing vocals on stage (thanks to the mic being placed on a stand).

But some bands don't do that and prefer to have the singer do... the singing duties only. While you may think that those singers are lazy compared to other band members who play the instruments, this is wrong as it can give them a chance to provide more stage presence (and don't forget that singing is an acquired skill which the other band members don't necessarily have). Such a band dynamic showcases how the lead singer acts as the Face of the Band. Granted, you might see a singer who also plays the tambourine on stage, but such instrument is easy enough to master for anybody who can hold one.

While this is more common in bands, there are also cases of solo artists who are musically-gifted and prefer to leave the instrumental duties to a backing band when it comes to playing on stage.

A Free-Handed Performer could be a Singer-Songwriter and may also be the Face of the Band. If their singing and songwriting skills save up for the rest of the band's performance, I Am the Band also overlaps.