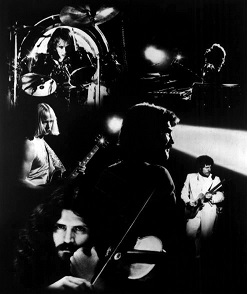 Kansas is an American Progressive Rock band from Topeka, Kansas. The band formed in 1973 and still tours in North America and Europe, though the lineup has changed over the years. They debuted with a Self-Titled Album in 1974 and have since become quite popular, becoming a staple on classic rock radio and having their songs played in movies and TV shows.

Supernatural and Anchorman: The Legend of Ron Burgundy fans most likely recognize them as the creators of "Carry On Wayward Son", which is easily one of their most popular songs along with "Point of Know Return" and "Dust in the Wind" (all three of which may be priced slightly higher on digital distribution channels). Other well-known songs from the band include "People of the South Wind", "Play the Game Tonight", "Fight Fire With Fire", and "All I Wanted".