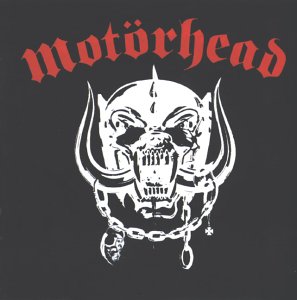 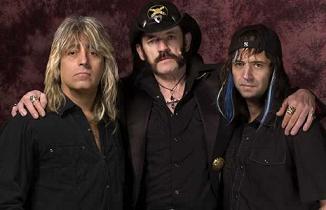 The lineup from 1996 until the band's breakup: (From left to right) Mikkey, Lemmy and Phil
"We want to be the band that, if this band moved in next door to you, your lawn would die."
— Lemmy
Advertisement:

Motörhead was founded in the middle of The '70s by bassist/vocalist Ian "Lemmy" Kilmister, after being fired from Hawkwind for, in Lemmy's words, "doing the wrong kind of drugs." Many members, with only Lemmy remaining, came and went. Along with Judas Priest, they kickstarted the New Wave of British Heavy Metal at the end of The '70s. Despite being called "the most punk band of the Heavy Metal scene", Lemmy preferred to call the music of his band by the simple name of "Rock and Roll."

via the band's official Facebook page that Lemmy died at the age of 70 after a short battle with prostate cancer, passing away while in front of his favourite video game and surrounded by his family.

A day later it was confirmed

that the band had disbanded, with their final lineup consisting of:

Their past formations had the following members:

"If you like to trope I tell you I'm your man":

...and don't forget the joker!