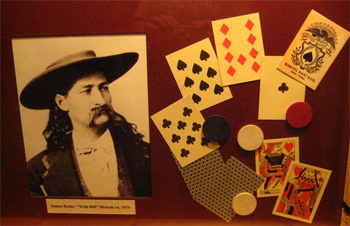 The alleged Trope Namer on display at the No. 10 Saloon, in Deadwood, South Dakota.
"He shot poor Willie through the head, which was a tragic fate
When Willie’s cards fell on the floor, they were aces backed with eights"
— Bob Dylan, "Rambling Gambling Willie"
Advertisement:

A Dead Man's Hand, also known as "aces and eights", is a poker hand containing two black aces and two black eights. It was supposedly the hand drawn by Wild Bill Hickok before his death, although this is unsubstantiated. (No one knows what his fifth card was. There are various conflicting claims as to what it was, with the earliest accounts claiming it to be a queen, either of hearts or of clubs, and some believe he discarded it to draw another, but was shot before he could make the new draw.) This hand is now considered unlucky, despite being better than over 95% of five-card hands. It is the lowest/weakest hand in poker to have a name.

In modern fiction, this particular hand is often used as a type of Portent of Doom, often signifying that the character who drew it is soon to die. Frequently in a Gambling Brawl.

Particularly likely to be found in The Western. For cards that are literally deadly, see Death Dealer.

Subtrope of Portent of Doom and Playing Card Motifs. No relation to Dead-Hand Shot.

If you're looking for the book in the Wild Cards series, it's here. Not to be confused with the Old West tabletop RPG, Aces & Eights.