Music / Bring Me the Horizon 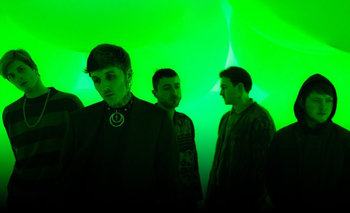 You call this a connection?
Influences:
Related Acts:
This is sempiternal!
Will we ever see the end?
This - is - sempiternal!
Over and over, AGAIN AND AGAIN!
— "Shadow Moses"
Advertisement:

Bring Me the Horizon (often abbreviated as BMTH) is a five-piece rock band from Sheffield, Yorkshire that formed in 2004. The band's name is paraphrased from a line of dialogue spoken by Jack Sparrow in Pirates of the Caribbean: The Curse of the Black Pearl ("Now... bring me that horizon").

BMTH started out as a deathcore band with a reliance on breakdowns, false-chord screaming, and riffs influenced by bands such as At the Gates. This sound is represented on their debut release, the grindcore-esque EP This Is What the Edge of Your Seat Was Made For. The only full-length work released in this phase of their career was their debut album Count Your Blessings, which brought them their first taste of popularity once the music video for lead single "Pray for Plagues" went viral.

Their next album, Suicide Season, marked a switch to a pure metalcore sound. This was inspired by the band's experience with extremely negative reactions to Count Your Blessings from "proper metalheads", and their subsequent decision that their follow-up would be the "make-or-break" moment for the band. The album's sound incorporated electronic and ambient elements alongside more melodic vocals, making for a slightly more accessible sound overall. This, along with the more mature songwriting on display, gained the album more popularity, as well as their first signature song of sorts in the track "Chelsea Smile".

Entering the 2010s, BMTH's releases would lean more into atmospherics and electronics, transitioning fully from their heavy roots into more alternative styles. They would incorporate symphonic arrangements and futuristic sound design (There Is a Hell...), influences from genres such as Post-Hardcore and Post-Rock (Sempiternal), and further elements from genres like Alternative Rock, Alternative Metal, Nu Metal and pop rock (That's the Spirit). While this trajectory was not without recurring controversy, it resulted in unprecedented levels of success for the band.

However, with their sixth album amo, released at the start of 2019, BMTH made their most unexpected move yet: releasing an album that more closely resembled straightforward pop music than anything they had released before, taking inspiration from genres as diverse as trance, hip-hop and electropop. Although this continued the band's commercial success (to the tune of their first two Grammy Award nominations), it was predictably quite divisive, outright alienating sections of their fanbase. To the band's credit, they welcomed the mixed reception with open arms; frontman Oliver Sykes likened it to the reception Suicide Season had upon release, and the album contained multiple tracks preemptively (and in somewhat tongue-in-cheek manner) addressing fans who would be mad at them.

Around the turn of the 2020s, BMTH continued experimenting with more types of electronica in the long-form release Music to Listen To..., and took the music world by surprise once again by utilizing their modern production styles to throw back to the heavier sounds of their early material (POST HUMAN: SURVIVAL HORROR).

Despite the fact that they've received a fair amount of backlash from many metal fans, each release has seen BMTH grow to new heights of popularity even with their routine stylistic shifts, and they are currently regarded as one of the biggest and most influential modern rock acts around.

Every scar will build my tropes: