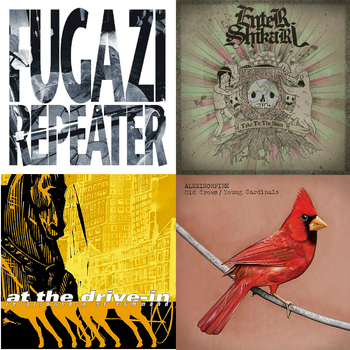 What Post-Punk was to the original punk movement, this was to Hardcore Punk.

It evolved basically the same way: Hardcore bands started experimenting with the basic template, including influences from other genres, and frequently experimenting with loud-soft song structures. Some of these bands included the Minutemen. It is mostly considered to have been influenced by hardcore forefathers Black Flag, who took on influences from various other genres and the use of experimental song structures. Many of them also took influence from the genre of Noise Rock, such as Big Black and Naked Raygun.

One important scene was concentrated around Washington D.C. and, in particular, Dischord Records, with bands such as Fugazi, Jawbox, Embrace, and in particular Rites of Spring. Rites of Spring began using more melodic riffs, shifting song structures, and deeply personal lyrics. And in this, a new post-hardcore subgenre was born — Emo.

"The Wave" of post-hardcore is a scene gradually building in popularity with bands like Defeater, La Dispute, and Touché Amoré. The style harks back to classic post-hardcore as well as elements of math rock and emo.

Some bands that are commonly referred to as post-hardcore: