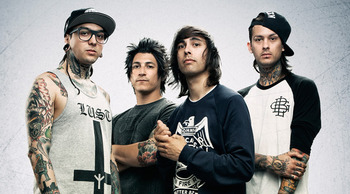 Pierce the Veil are a Post-Hardcore band from San Diego, California. Known for their unique style mixing Screamo Music, Post-Hardcore, Metalcore and, of all things, traditional Mexican music, as well as vocalist Vic Fuentes's uniquely high tenor, they debuted in 2006 with brothers Vic and Mike Fuentes as founding members and released their first album in 2007.