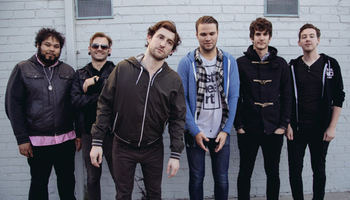 He wrote the script on getting you out of your dress.

Dance Gavin Dance is a post-hardcore band formed in 2005 in Sacramento, California. They are known variously for their frequent line-up changes, their interplay between harsh and clean vocalists, their diverse range of styles, being the pioneers of so-called "Swancore," arguably creating the modern post-hardcore scene, or for just being that band with the silly name. The lineup changes are no joke, with only guitarist Will Swan and drummer Matt Mingus appearing on every record.

The band's history can be roughly divided into four eras, based on who the clean vocalist was at the time:

This is the first era during which Jonny Craig provided clean vocals, and includes their debut EP Whatever I Say Is Royal Ocean, and their debut full-length Downtown Battle Mountain. These are some of DGD's darkest material, before the pop aspects of their sound began having further influence. The era ended when Jonny Craig, who is notoriously hard to work with, split with the band because of personal tensions.

Jonny Craig was soon replaced by former Five Minute Ride singer Kurt Travis, and soon they recorded their self-titled album Dance Gavin Dance, also called Death Star because of its cover. But before they could release it, harsh vocalist Jon Mess decided to leave the band, partially because of his Lyme disease, and partially because his good friend, bassist Eric Lodge, was also leaving Dance Gavin Dance. Following their departure, Will Swan took up screaming duties, and Jason Ellis (also of Five Minute Ride) replaced Eric on bass. They subsequently recorded the album Happiness, which was a slight departure from their usual style (if that can even be defined) in that it took a funkier and jazzier direction, with a few songs on the album having no screaming at all. It was also the first album to feature Will Swan's rapping, which has appeared on every album since. Not long after the release of Happiness, second guitarist Zachary Garren was kicked out of the band for clashing with Will Swan, with Zach allegedly taking a larger creative role in the album than Will would have liked.

Eventually Kurt Travis and Jason Ellis were kicked out of the band so the band could reunite with their original lineup (minus guitarist Sean O'Sullivan). Jonny Craig and Jon Mess were again the singers of Dance Gavin Dance. In reference to this reunion, they named the album they released during this era Downtown Battle Mountain II though to what extent the album is an actual sequel to their debut LP is debatable. It may have had the same lineup, but the style of music played on DBM 2 is significantly more influenced by soul compared with DBM 1's more straightforward post-hardcore sound, and Jon Mess's lyrics on DBM 2 are at their most nonsensical. This era couldn't last long though, as Jonny clashed with every member of the band, as well as many record label officials. Jonny's drug habit also made members very uncomfortable, and it was agreed that Jonny would leave the band a second time.

Jonny was replaced by former Tides Of Man singer Tilian Pearson, and in 2013 they released their fifth album Acceptance Speech. There was a mild controversy surrounding the album's production, with fans claiming it was sloppily done, that the bass was inaudible, and that Tilian's voice was autotuned. All of these criticisms were addressed in their 2015 album Instant Gratification which was, in many ways, a converging of all the different styles Dance Gavin Dance has had in the past decade, and remains one of their most well-received albums to date. The recording process was reportedly so easy that on December 23 of the same year, Rise Records confirmed that Dance Gavin Dance would release their next studio album in 2016. Mothership, the band's seventh full-length, was finally released on October 7. Studio album #8, which is titled Artificial Selection, was released on June 8, 2018. The band's ninth studio album, Afterburner was released on April 24, 2020.