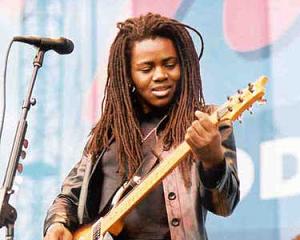 "You got a fast car
But is it fast enough so we can fly away?
We gotta make a decision
We leave tonight or live and die this way"
Advertisement:

Tracy Chapman (born March 30, 1964) is an American singer/songwriter who first rose to fame in 1988 with the hit "Fast Car" from her self-titled debut album; the album also earned her the Best New Artist Grammy that year. Chapman was at first regarded as something of an oddity, in that she was a black woman who played guitar and wrote songs that were best classified as "alternative folk", but her strong, melodic voice, socially conscious lyrics, and solid musical talent made people sit up and take notice.

She largely avoided the "Best New Artist" curse, as her biggest hit, the bluesy "Give Me One Reason" reached #3 on the Billboard chart in 1997 and won the Grammy for Best Rock Song, but she has more or less remained a cult artist, with a small but extremely devoted fanbase.

Chapman is also known for her activism, supporting such causes as Amnesty International, Make Poverty History, and has long supported the city school system in her hometown of Cleveland, Ohio.