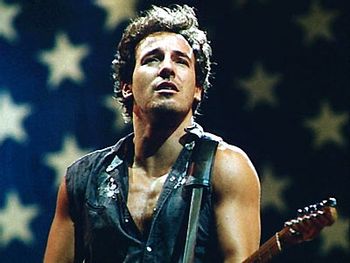 "Cuz tramps like us, baby, we were born to run."
Advertisement:

Bruce Frederick Joseph Springsteen (born September 23, 1949), nicknamed "The Boss", is one of the most notable singer-songwriters to come out of the 1970s. He's also the living patron saint of New Jersey; speak ill of him in the Garden State at your peril.

Born in Long Branch, Springsteen arose out of the "Jersey Shore Sound" scene of the 1970s, which unabashedly combined rock and R&B elements. Perhaps his most well-known albums are Born to Run (1975) and Born in the USA (1984). Alongside his backing group the E Street Band, the membership of which has remained mostly constant throughout the years, Springsteen is best known for a "heartland rock" style that features themes of Americana, working-class desperation in an age of cynicism, and hope for a better life. Despite his associations with liberal politics and John Kerry in particular, his songs have sometimes been appropriated by conservative politicians, oftentimes without his permission. The most glaring example is the song "Born in the USA", which despite its title is not an unequivocal celebration of that country, but rather a condemnation of its treatment of Vietnam veterans. When Ronald Reagan tried to use the song for his reelection campaign in 1984, Springsteen famously told the President that he couldn't use it.

Despite his most well-known work being produced in the '70s and '80s, he is still recording today. His latest album, Letter to You, was released in 2020. He also campaigned for Barack Obama during the 2008 American presidential campaign and performed at the inauguration.

Springsteen is also notable for helping to launch Courteney Cox's career when she appeared in his video for "Dancing in the Dark."

Springsteen was honored at the 2009 Kennedy Center Honors

, with the presentation done by Jersey native (and lifelong fan) Jon Stewart. He was also awarded the Presidential Medal Of Freedom in 2016, was inducted into both the Rock & Roll Hall of Fame and Songwriters Hall Of Fame in 1999, and has won a Best Original Song Oscar award (for "Streets of Philadelphia") and a Tony award.

He once wrote a song about Harry Potter

, after reading the books to his son, and tried to get it into the movie.

Bruce Springsteen is the Trope Namer for:

"Tropes like us, baby we were born to run!":