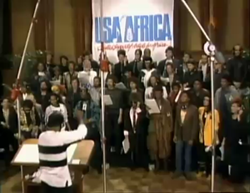 At its time, this was a Who's Who of the Music Industry
Good intentions and charity work are all admirable, but they don't make an awful song any less awful.
— Todd in the Shadows
Advertisement:

There are some big problems in the world, and this song is here to remind you that you really ought to be doing something about them, with vivid descriptions of the problem and a call to action. Often the recourse of artists who feel like they should be using their worldwide fame to make a positive impact on the big problems faced by charitable organizations — or in other cases, just a powerful subject for a good song.

A more cynical potential motivation that's often suggested/joked about is that the performers don't care as much (if at all) about the cause in question as they are about the goodwill this can engender with the public and press.

Don't be surprised if the music video has a number you can call to donate today, or if the publisher elects to donate a portion of all album proceeds to a relevant charity. Also a popular choice for commercials soliciting charitable donations. This type of song was particularly popular in The '80s, when it was common to round up whole choruses of name musicians to sing one song in support of a cause; the hammy, earnest performances that often end up being mocked. Or rounding up an ensemble of name musicians to perform at one big charity event, such as Live Aid

in 1985. In fact, it may be on the verge of becoming a Discredited Trope: Todd in the Shadows pointed out in his review of the 2010 "We Are the World" remake that it was hard to take the whole production seriously since the original had been so often parodied after its release in 1985.

Compare Protest Song, which is generally a specific protest against some specific event or practice and is more about social or political change than encouraging participation in existing charity work. See also Supergroup, when well-known performers join up to collaborate on regular musical projects.