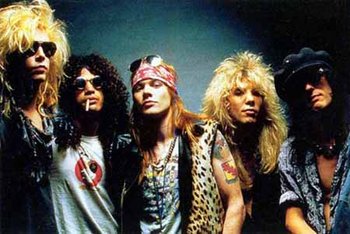 The classic line-up of Guns N' Roses. From left to right: Duff McKagan, Slash, Axl Rose, Steven Adler, and Izzy Stradlin.
"You know where you are?
You're in the jungle, baby!
You're gonna die!"
—"Welcome to the Jungle"
Advertisement:

AKA: Axl Rose and Friends

Guns N' Roses is an American rock band, formed in Los Angeles, California in 1985. The band, led by front-man and co-founder Axl Rose, has gone through numerous line-up changes and controversies since their formation. The band has released six studio albums, two EPs and one live album during their career.

Guns N' Roses has sold an estimated 90 million albums worldwide, including over 42 million in the United States. The band's 1987 major label debut album, Appetite for Destruction, has sold in excess of 28 million copies and reached number one on the United States Billboard 200. In addition, the album charted three Top 10 hits on the Billboard Hot 100, including "Sweet Child O' Mine" which reached number one. The 1991 albums Use Your Illusion I and Use Your Illusion II debuted on the two highest spots on the Billboard 200 and have sold a combined 14 million copies in the United States alone. After over a decade of work, the band released their follow-up album, Chinese Democracy, on November 23, 2008, a date to be remembered throughout rock history as the day when pigs actually flew (not associated with Pink Floyd, anyway).

The group was inducted into the Rock and Roll Hall of Fame in 2012. In an inversion of what happened to the band itself, everyone but Axl (and Izzy and Dizzy) attended the ceremony.

In another downright unexpected announcement given how troubled things got, in early 2016 it was announced Slash and Duff were returning to the band. This "reunion" of sorts performed in April, being one of the first acts in Las Vegas' new arena before a headlining gig at Coachella. Axl Rose was also chosen to sing in AC/DC after Brian Johnson's hearing loss forced him into (temporary) retirement. This soon led to the Not in This Lifetime... Tour, which ran until 2019 and became the third highest-grossing tour in history.

The band also served as the basis for two different pinball machines, both co-designed by Slash himself: Guns N' Roses (Data East) (1994, around the time of the Use Your Illusion tour), and Guns N' Roses (Jersey Jack) (2020, tying into the Not in This Lifetime... tour).