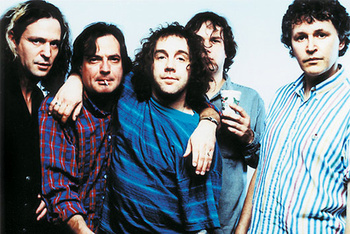 I write a whole page of great titles, I have to give them personalities and write songs for them.
Robert Pollard

The band was formed by guitarist/vocalist Robert Pollard, and mostly featured a large cast of other band members, chiefly because of Pollard's habit of recording with whoever was on hand or announcing the band's breakup and assembling a new lineup shortly afterwards. The classic lineup of the band consisted of founding members Pollard and guitarist Mitch Mithcell, with guitarist Tobin Sprout, bassist Greg Demos and drummer Kevin Fennell. This lineup was in place from 1986 to 1997, and then again from 2010 to 2014.

GBV's first release was the EP Forever Since Breakfast in 1986, which was recorded in a professional studio and had a harmony-laden folk-rock sound not far removed from R.E.M.. However, the EP sank without a trace, and Pollard grew to regret it, deriding it as "sterile". From next year's Devil Between My Toes on, GBV became a purely studio band (to accomodate Pollard's day job as a teacher), and gained its Signature Style: short songs written at a blindingly fast pace recorded in a lo-fi manner (usually to a Portasound 4-track), and drawing influences from what Pollard called "the four P's": Punk Rock, Pop, Psychedelic Rock and Progressive Rock (Post-Punk, Pthe Pbritish Pinvasion and Pgarage Rock also provided an influence). The material released during this period tended to only circulate among friends and family members.

After years of attracting little in the way of recognition outside of Dayton, the band decided to split after releasing their 1992 album Propeller, which they considered to be their finest work to date. However, the album turned out be their breakthrough in the indie rock world despite its limited release of 500 copies. It gained the band an increasingly large fandom (which included bands like Sonic Youth and The Breeders) and they decided to remain together. Now becoming increasingly known and having a steady lineup that included guitarists Tobin Sprout and Mitch Mitchell (no, not that one), bassist Greg Demos and drummer Kevin Fennell, GBV released its landmark album Bee Thousand in 1994.

Bee Thousand, like Propeller before it, was planned to be the group's final album, as Pollard planned to focus on his day job as an elementary school teacher after its release. However, that would once again not be the case. Consisting of both new songs and archival recordings, Bee Thousand was critically acclaimed and became the band's biggest album to date. With the help of the single "I Am a Scientist", it also turned them from a somewhat-known entity into one of the biggest American indie rock groups of the 1990s. Once again, the plans for Guided by Voices to break up were put on hold and the group signed to the influential indie label Matador. The follow-ups Alien Lanes and Under the Bushes, Under the Stars were similarly well-received.

The Pollard-Sprout-Mitchell-Demos-Fennell lineup soon disintegrated due to the pressures of touring. A new lineup was assembled from the members of Cleveland glam rock band Cobra Verde, with the result being the Rock Opera Mag Earwhig!. However, Pollard dismissed this lineup as well, and brought together a new one, which included a returning Demos and The Breeders alumni Jim MacPherson and Nate Farley. The band then moved to TVT Records and recorded Do the Collapse with Ric Ocasek. The album's slicker, more radio-friendly sound caused a big They Changed It, Now It Sucks! reaction among the fanbase, one which was also present but to a lesser extent on its followup Isolation Drills. Failing to attract major success, GBV left TVT in 2002 and returned to their usual sound with Universal Truths and Cycles.

After Half-Smiles of the Decomposed's release, Pollard announced the disbanding of GBV, saying "This feels like the last album for Guided by Voices. I've always said that when I make a record that I'm totally satisfied with as befitting a final album, then that will be it. And this is it." A final live tour followed.

The band's "classic" Pollard-Sprout-Mitchell-Demos-Fennell lineup announced a reunion in 2010, and true to their prolific reputation they released six albums between 2012 and 2014 before breaking up once more. They announced another reunion in 2016 with a lineup that initially consisted of Kevin March in his third stint for GBV on drums, plus newcomers Bobby Bare Jr. (the son of Country Music legend Bobby Bare) and Nick Mitchell (no relation to Mitch) on guitars and Mark Shue on bass, before Mitchell was replaced by long-serving post-classic era guitarist Doug Gillard. The reunion included a tour and a new album, Please Be Honest. The band remains prolific, releasing up to three albums a year since 2017.

Guided By Voices provide examples of the following tropes: