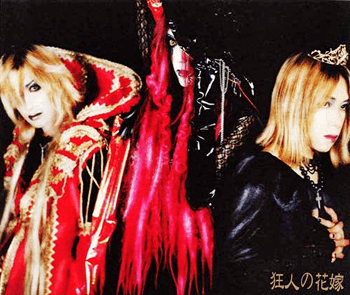 Visual Kei, or Visual Style, is an artistic movement among Japanese musicians that is characterised by the use of make-up, elaborate hair styles and flamboyant costumes, often, but not always, coupled with androgynous aesthetics, in the style of David Bowie. It came about in the early 1980's, spearheaded by bands such as DEAD END, X Japan, and BUCK-TICK, and has existed in various forms ever since. (You can see more of the history over on the Useful Notes page, if you like.)

It is often considered a sub-genre of J-rock (a term referring to Japanese rock in general), with its roots in Glam Rock, Shock Rock, Punk, Heavy Metal, and Kabuki Theater, though its use outside of Japan is making this somewhat an outdated definition. As is usual amongst more theatrical musical genres, the aesthetics are supposed to be as strong as the music in order to complement and enhance it, and although there have been many trends over the years there is no defining sound.

In the current scene, for instance, the most commonly used genres are hard rock and Heavy Metal (except for within the Oshare subgenre, which favours pop-punk or pop rock, and Digital kei, which can span everything from Electronic Music to pop), but there is also horror punk, Power Metal, Gothic Metal, electronic, pop rock, nu-metal, Industrial, Metalcore and even Death Metal. Even some rare Rap Metal and straight-up rap can be found. Exactly which genres are used often depends on the time period: In the 80's rock and glam metal were popular; in the 90's a heavy goth influence came in and many bands developed a softer or more experimental sound, with the use of synth becoming common; and in the early 2000s Metalcore, Alternative Metal and Pop Punk have become the norm. As of The New '10s, Heavy Metal of various subgenres and Hard Rock are experiencing some renewed interest despite most said bands being unsigned or reunions of older HR/HM acts (or ongoing acts such as BUCK-TICK, Dir en grey, and The Gazette), and Electronic Music styles are gaining popularity among newer bands and solo artists, while the majority of label signings and promotion and publicity still tends to go to Pop Punk Oshare Kei artists.

Despite the highly feminine appearance of many VK musicians, the majority of band members, as with other rock genres, are male.

Visual Kei is often broken down into subgenres, the most common being:

There are always exceptions to this though. Many bands straddle genres and some don't really fit into any at all. Other bands start off visual and then leave the subgenre. Also, as there are no real rules to Visual Kei besides the fact that you have to put effort into a quirky appearance, there are often debates amongst fans as to which bands count as visual in the first place.

In recent years, Visual Kei has begun to be used by non-Japanese bands, especially bands in the underground metal scene. One such band is the Swedish Alternative Metal / Melodic Death Metal band Seremedy, which gained some mainstream success before disbanding in 2013 - and Kerbera, which is led by its former vocalist SEIKE. YOHIO, the former guitarist, has began a career as a solo guitarist and vocalist as well. Also notable are Bat A Ar, another Swedish example, and Salem's Lott, an American band with influences from 80s glam rock and later 2010-era Visual Kei.

Media inspired by or making major references to Visual Kei:

Productions for which Visual Kei or post-Visual Kei artists/bands have created music/soundtracks (please list in this section if the band existed before the anime or manga or film - if the band was created for the production, it belongs in one of the above categories)

The Visual Kei genre and scene provides examples of: