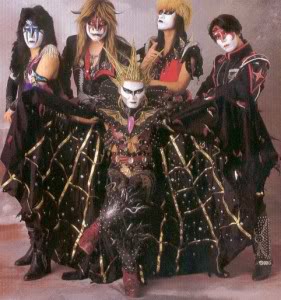 "The demon that devours holiness has resurrected again!!!"
Advertisement:

SEIKIMA-II (pronounced Seikimatsu) is probably the first and only band to successfully fuse Visual Kei (as well as help create the genre) with a slightly different take on Black Metal, possibly also being one of the few truly melodic Black Metal bands in the process. It formed in 1982, around the same time as many of the other bands that would form what would become known as Visual Kei such as X Japan and BUCK-TICK were either forming or in the early stages of inspiration.

The band would go on to be one of the most highly successful metal acts in Japan, with sporadic ongoing activities even after it had to officially disband at the end of the century per its mythos. There was also, in The '90s, at least one interview on CNN world with Demon Kakka, and the band inspired many a Shout-Out including an appearance of "Kogure" as a character in Fist of the North Star, and Detroit Metal City and its live-action films, which primarily revolves around a band that is an Expy of SEIKIMA-II.