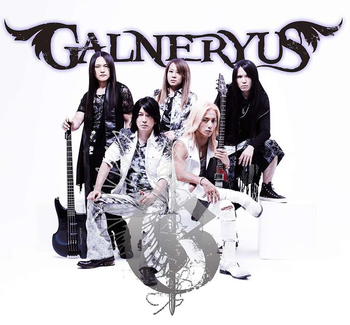 A neo-classical/Power Metal band from Osaka, Japan formed in 2001. Galneryus shares a similar style to bands such as Yngwie Malmsteen's Rising Force and Stratovarius. Though they began their career as a Visual Kei band, they quickly dropped the look in favor of a more ordinary casual look, though they continue to almost universally use stage names (with the exception of drummer Jun-ichi Satoh). Although they have enjoyed considerable commercial success in their home country (especially after SHO joined with 2010's Resurrection), their following overseas is much smaller, albeit still highly dedicated. They also seem to have a thing for flags with at least one song with a title referring to flags on four of their eleven albums.note "United Flag," "Rebel Flag," "Struggle for the Freedom Flag," "Braving Flag," "The Flag of Reincarnation," and "The Promised Flag."

Galneryus's future was in question after the departure of vocalist Yama-B. Yama-B quit due to creative differences and disagreeing with the direction the band was taking. He was replaced by Masatoshi Ono in 2009, while Yu-To was replaced by Taka for bass.

This band exhibits the following tropes