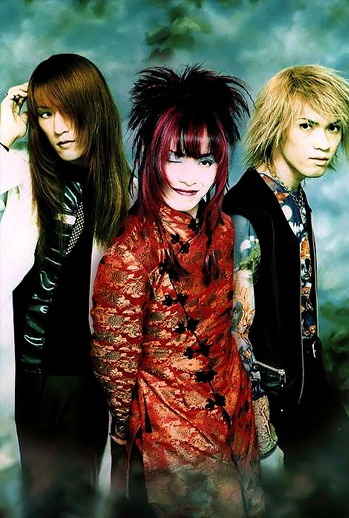 Or in short: Japanese counterpart of Culture Club

SHAZNA is a Visual Kei/Japanese rock band. And the time period from whence they debuted speaks much of their music as they are somewhat reminiscent of mainstream sounding music of the day such as Alternative Rock (early), New Wave Music and Glam Rock. They also have a somewhat more 80s taste. Though it does help that IZAM (leader of the band whose choice of fashion was rather iconic due to its extreme cross-dressing feminine look) was influenced by Boy George and Culture Club, hence the almost similar fashion.

They've reached popularity after the release of their major debut single, Melty Love on August 27, 1997. This would since become their Signature Song from now on and be covered by visual artists in the future. Despite only 8 years being together, they've had an extensive career and released many singles and albums. When they disbanded in 2000, each had gained successful solo careers. IZAM by then had a less feminine look.

However, in 2007, they've reunited and released one single and album together entitled Heart and 10th Melty Life respectively. On November 3, 2008, they announced that they would disband and played their last concert on March 22, 2009 at Shibuya O-East which they did. In 2017, they officially reunited for their 20th anniversary along with three new members added to the lineup, resulting in a new single with an accompanying music video, Koi no Tempo

, being released the following year, 11 years since their last single.