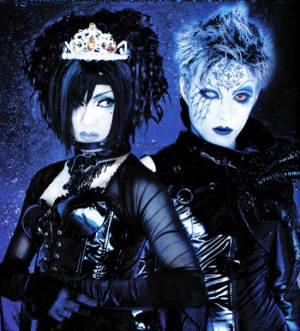 Schwarz Stein are a Darkwave Visual Kei/Digital Kei duo formed by musician Hora and singer Kaya, active from 2001 to 2004, with a brief reunion in 2011. Visual Kei's answer to the Pet Shop Boys, they were one of few acts in the movement not to play rock or metal, specializing exclusively in electronica.

Formed as Rudolf Steiner in 2001, they were signed to Mana's Midi:nette label in 2002. Re-christened as Schwarz Stein, two albums followed, both produced by Mana. Despite their quick success, the duo split due to (genuine) Creative Differences in 2004. The divorce was an amicable one, and they've continued to collaborate since, primarily on several of Kaya's solo releases.

They've reunited as a duo thrice: as another cell in 2006; as Schwarz Stein in 2011 for a one-off concert to celebrate their tenth anniversary and a new EP; and again as Schwarz Stein from 2014 onward, with several singles and two greatest hits albums released since then.

Tropes applying to Schwarz Stein and their music: