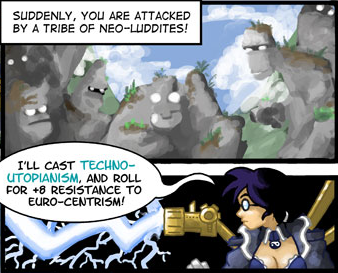 The public's been clamoring for some more intelligent television in the wake of Reality TV and Lowest Common Denominator Recycled Scripts. So, you go and write a series loaded with difficult quantum mechanics, quoting obscure 17th-century philosophers, with characters who are philosophical Magnificent Bastards who speak a dozen languages while conversing to each other by sending Shakespearean Zen koans hidden into chess move patterns, and packed with allusions to ancient Sumerian religion. You make sure all your Technobabble is scientifically plausible and go to great lengths to make sure all your ancient Roman soldiers are wearing exact replicas of period equipment. Now it's True Art, right?

So you sit back and watch the ratings — which plummet faster than a rocket-propelled brick in a nosedive. What went wrong? In trying to avert making the classic mistake that Viewers Are Morons, you went too far and ended up assuming that they're geniuses instead. Of course, if you're working in a medium that doesn't need an audience of millions to be profitable, you may not care. While a lot less common than its more insulting opposite (any show without the "mass-market appeal" that the less high-brow stuff has will be Screwed by the Network without mercy), overestimating the audience can be more of a death knell than underestimating it, even without network sabotage.

The opposite is also true: an intelligent, engaging work may lack any sort of references at all. There's also the trap of being so consumed with the complexities that you forget simpler things like plot and characterization.

However, in the eyes of artists and some fans, this is a Justified Trope. There are many instances where a film with dense references and information provides an Unconventional Learning Experience, introducing high concepts in a dramatic, entertaining fashion. This empowers readers and viewers and makes them interested and curious in exploring offbeat ideas that they otherwise might have felt they are not educated to understand and accept, since many of them have internalized the Viewers Are Morons ideas and reflexively feel some movies or books are not for them. For instance, Joseph Campbell's Heroic Journey concept was fairly obscure before Star Wars used a Heroic Journey plot, which brought the concept into the mainstream. There's also changing societal norms to consider. The number of people with college educations is higher today than it was, say, in The '60s, so what used to be obscure becomes mainstream with the passage of time, and indeed, new genres and new storytelling techniques are created because audiences have become too smart for old plots and hackneyed clichés. In the case of some artists, the dense play of text and subtext for them is the reason why they make art in the first place, and they set out to fill it with Genius Bonuses and Rewatch Bonuses so that audiences can immerse themselves in understanding the work fully.

Ironically, the reverse is also true. Art forms that we regard today as High Art like opera, classical music, poetry, and even Greek or Shakespearean tragedy were popular and commercial work in the day. Audiences across the class and educational spectrum had no trouble understanding and following these works. And indeed, they were all filled with topical and common references that audiences had no trouble following.

It is this distinction which is why you see so much dissonance in understanding humor as a general topic. It is far easier for the Lowest Common Denominator to "get" a joke, if there is a clear "butt" of the joke. However, people who really follow humor aren't aiming to disparage people, but are instead in finding out the Twist Ending, or the Pun.

The most successful way to do this may be to provide a Genius Bonus. If a writer gives the more intellectual content a small dose at a time, viewers can still enjoy the work at their level, but those who get the Easter Egg will enjoy its hidden depths.

See also Faux Symbolism, Mind Screw, and Moon Logic Puzzle. Not mutually exclusive with Artistic License or Dan Browned — just because a show is crammed with obscure knowledge doesn't mean that it is correct, even when it comes from the show to begin with. This can be the result of too many In Jokes being included in a work.

See also Viewers Are Morons, the opposite side of the coin. When this trope and the latter trope conflict however, you can wind up with an Unpleasable Fanbase.