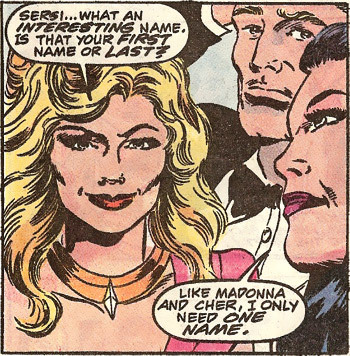 The character or characters go by a single name, with no family/clan/whatever identifier. Unlike No Full Name Given, it's not that their full name is never made known to the viewer. The full name simply does not exist. Cher is an oft-cited example.

Contrast I Have Many Names, Repetitive Name (when someone's first name and last name are the same) and compare Everyone Calls Him "Barkeep" for an extreme example.

open/close all folders
Advertising
Anime and Manga
Advertisement:
Comic Books
Comic Strips
Fan Works
Films — Live-Action
Literature
Music
Myths & Religion
Podcast
Professional Wrestling
This happens so often in WWE that it's led to a meme called "The Name Goblin", who randomly steals half of a wrestler's name some time after they debut. In recent years, Big E (Langston), (Antonio) Cesaro, (Alexander) Rusev, (Adrian) Neville, Elias (Samson), Andrade (Cien Almas), (Mustafa) Ali, and (Matt) Riddle have all had chunks of their names lopped off after debuting. The name reduction is never explained and never acknowleged. The most popular theories are that either having one name makes them easier and/or cheaper to market somehow, and that someone high up on creative (usually Vince McMahon himself) thinks having a single name makes them sound tougher.
Radio
Theatre
Toys
Video Games
Webcomics
Web Original
Western Animation
Real Life
Feedback

Alternative Title(s): One Name Only