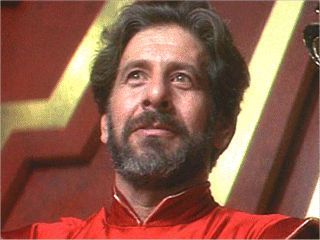 "Obviously, when you are successful in a film and the money flows, yes, obviously, it is very nice. But to tell you that is the most important thing, I am not sure."
Advertisement:

He started his showbiz career by performing in a theatrical troupe while on active service in the Israeli army. He worked in theater after that, then made his film debut in 1961. Topol's big break came with 1964 film Sallah Shabati, which played in film festivals around the world and was nominated for an Oscar for foreign language film (and won a Golden Globe).

Probably best known internationally for his role as Tevye the dairyman in Fiddler on the Roof in both the musical (the London production in his case) and the film, and for his roles as Milos Columbo in the James Bond film For Your Eyes Only and Dr. Hans Zarkov in Flash Gordon.

He has been nominated for an Academy Award and a Tony Award, and has won two Golden Globe Awards.