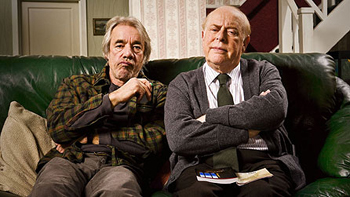 The Old Guys is a sitcom starring Clive Swift and Roger Lloyd-Pack and was created by Jesse Armstrong and Sam Bain, the minds behind Peep Show. The show follows Tom (Lloyd-Pack) and Roy (Swift) as they navigate their twilight years. Sounds idyllic, right? They're basically expies of Mark and Jeremy, so their twilight years consist of verbal abuse, lusting after unattainable women, and Failure Is the Only Option.