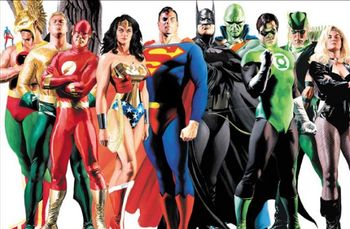 Only one of them is wearing anything near conventional pants, and you can't see them anyway.
"I think this uniform needs something, something that says, 'I'm here to destroy you...' but with a sense of fun! I've got it! Wear your underwear outside your pants! [Turns to audience] Hey, it worked for Madonna!"
— Dot Warner, Animaniacs
Advertisement:

Sister Trope to Leotard of Power, Underwear of Power is when a superhero or a related type of character wears a speedo or something similar as part of their outfit. Speedos or briefs are usually used for this today. Initially used for nearly every hero (who didn't wear a full body suit) back when they looked like short pants or trunks instead of a speedo, this eventually became more associated with female characters, occasionally even going into bikinis, actual underwear, and thongs, although less often (and usually on women).

For most super heroes this was initially a reference to the Strongman uniform (i.e. a bathing suit) of the day. Then it became iconic of super heroes, mostly due to Superman, which the rest of the heroes then drew upon.

A secondary, initially unintended reason why so many characters had this, is because of the low quality of printing used for comics at the time. In a fight scene, making a character's hips distinct from the rest of their torso and their legs frequently made the action "read" more clearly in a low-quality image (you could clearly see if a character was twisting around, for example).

Wearing them over tights was a staple of The Golden Age of Comic Books, but today only really exists in parody (or for characters from that time that are still around).

For comedy, drama, Fanservice, or simply for their enemy to humiliate them, expect those who wear Underwear of Power to suffer a Groin Attack at least once. Especially for a Superhero, it's not uncommon because surprisingly, some of them are weak in that part while some others are not. You can also expect those who wear them to be given a Wedgie in a comedy or parody.

However, just like Leotard of Power, with the shift from trunks into anatomically revealing "underwear", this has become a Fanservice Trope and is also pretty much dead—dropped in favor of bodysuits, or regular clothes. See Most Common Superpower and Show Some Leg for some related tropes. If the hero looks monstrous, expect the Underwear Of Power to be the only thing the hero wears.