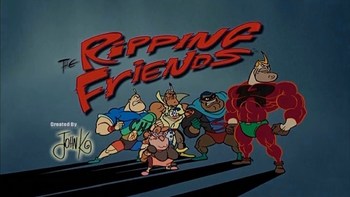 The Ripping Friends (2001-2002) was a very short-lived animated series created by John Kricfalusi of The Ren & Stimpy Show fame. It was about four brothers who are superheroes: Crag (the leader), Rip, Slab and Chunk Nuggett. Their chief is their mother, He-Mom, who is a very masculine woman. Their servant and biggest fan is Jimmy the Idiot Boy from The Goddamn George Liquor Program (and the "Spumco" production card at the end of the John K-produced episodes of Ren and Stimpy): a brain-dead, idiotic 8 year old who can't speak properly. Their Rogues Gallery included Citrocet, a Mad Scientist; the Indigestible Wad, a living wad of gum; Flathead, a sapient tapeworm; and Frictor.

Intended to be Kricfalusi's Spiritual Successor to Ren and Stimpy, its production (much like Ren and Stimpy when it was on Nickelodeon and when it was remade as Ren & Stimpy "Adult Party Cartoon") was stymied by his usual creative differences with network and studio heads, who dismissed his trademark off-model custom poses

for something more conventional, spoiling his vision for the show until he came to outright loathe it, resulting in its short run.

The series aired on Canada's Teletoon and, in America, on Fox Kids in the twilight years of the block (and of Saturday morning cartoons in general) and once aired on Adult Swim (since this show was considered to be too gross and sexual for "children's entertainment") in 2002.