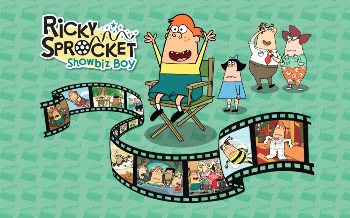 Ricky Sprocket: Showbiz Boy, a Canadian animated series produced by Studio B Productions and created by the husband-and-wife animation duo David Fine and Alison Snowden (previously known for Bob and Margaret). The show aired on Nicktoons in the United States and Teletoon in Canada for 2 seasons and 25 episodes between 2007 and 2009.

The show is about the eponymous Ricky Sprocket, a highly successful child actor working for Wishworks Studio, owned by Mr. Louie Fischburger. While Ricky's only 10 years old, he already has practically everything that a kid could ask for. However, unlike most child stars, Ricky doesn't let showbiz and celebrity get to his head, because deep down, he's still just a average kid with average kid problems. When not battling animatronic alien invaders on the silver screen (usually under the direction of Wolf Wolinski), he's doing chores and homework or hanging with his friends Benny Newford, Morris Moony, Jamal Pennycook, and Alice Applewood. Of course, he also has to put up with his share of troubles, be it his mother Bunny's disapproval of his "showbiz shenanigans", the bizarre sausage-themed life advice of his father Leonard, the scheming of his little sister Ethel, or the envy of his spoiled archenemy and fellow child star Kitten Kaboodle.