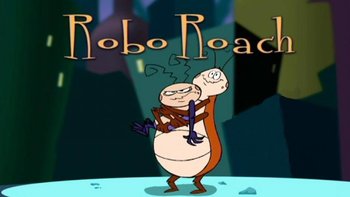 The duo's herenote From left to right: Reg and Rubin.
Hey! I've got a story to tell,
about a roach named Rube with a high-tech shell.
Caught in a trap late one night.
He got away fast, but he didn't feel right.
Nowhere to hide, so he started to run.
Instead of a swat, HE GOT A CHIP ON HIS BUG!!
Now he's the roach with the most. Roboroach. (ROACH!)
He don't like to boast. Roboroach. (ROACH!)
Unlike his brother Reg (he's got all the edge).
Roboroach and Reg!
Roboroach.
Roboroach (and Reg).
—The Bragging Theme Tune.
Advertisement:

Roboroach is a Canadian Animated Series created by Canadian cartoon screenwriter J.D. Smith. It was released on Teletoon in 2002 and produced by Portfolio Entertainment (which would go on to make a couple other cartoons for Teletoon, like Carl² and Freaktown).

The show follows Rubin "Rube" Roach (voice of Scott Thompson), a cockroach living in the insect-populated city of Vexburg, which is situated inside the walls of a laboratory. One night, Rube is caught by scientists and becomes a guinea pig for an experiment, wherein he had microchips inserted into his body. He is saved by his brother Reginald "Reg" Roch (voice of Ted Dykstra), but as they escape, Rube jumps into a wall socket and gets a nasty shock that changes him into a powerful cyborg cockroach called "Roboroach". Swearing an oath to never utilize his new powers for self-gain, Roboroach uses his cyborg implements to do all kinds of good deeds for the citizens of Vexburg while living with Reg, who is perpetually discontent with his brother's refusal to put his array of abilities for money-making purposes and desperately wants to be rich.