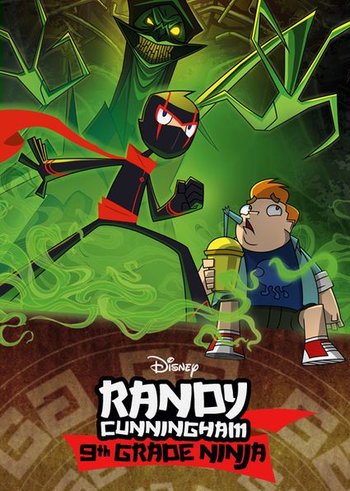 Smoke bomb!
For 800 years, Norrisville High has been protected by a ninja.
No one knows that every four years, a new warrior is chosen.
A freshman to fight the forces of evil.
I am the ninja. I am Randy Cunningham!
Advertisement:

Randy Cunningham: 9th Grade Ninja is Disney XD animated action/comedy series created by Jed Elinoff and Scott Thomas, a writing duo who previously worked on shows such as Scooby-Doo! Mystery Incorporated and The Haunting Hour. The series was produced by Titmouse (Motorcity) and Boulder Media (Foster's Home for Imaginary Friends).

As the opening narration helpfully explains, the American town of Norrisville has a frequent target of monsters, robots, and bullies for hundreds of years. Thankfully, the student body of its local high school has always been host to a legendary protector known only as "The Ninja". Of course, the Ninja isn't as much of a monolithic, legendary figure as everyone has been led to believe, as the position is passed from teenager to teenager as each one proceeds to graduate from the school. And at the start of his freshman year, via a package left in his bedroom, the unlikely Randy Cunningham discovers that he has been chosen to be the next Ninja. Joined by his best friend Howard, Randy now must protect the school from the likes of monsters sent to destroy him by the evil McFist Corporation as well as keep his new identity a secret. Cue the theme song!

If the show's aesthetic is making you wonder why there isn't more dark comedy about how much humanity is a collection of morons, it may be because Jhonen Vasquez (Invader Zim), served as one of the main character designers, with the series' background design also taking on a lot of his influence.

The series ran from August 2012 to July 2015, with its second and final season being quickly burned off with little fanfare. Post-cancellation, the show is currently streaming on Disney+.

After Randy's French teacher tells her class to open their textbooks to page 138, we get a shot of her butt while she's crossing her legs.

After Randy's French teacher tells her class to open their textbooks to page 138, we get a shot of her butt while she's crossing her legs.