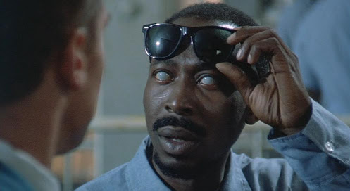 Granddad: You ran into our car! Are you blind?!
Stinkmeaner: YES... I... am! So?
Granddad: Wait, you're blind?
Stinkmeaner: Yes! Blind! You got a problem with that, nyuggah?
— The Boondocks, "Granddad's Fight"
Advertisement:

A very common form of Twofer Token Minority is the blind black guy. He's blind, and he's black. He may wear Cool Shades as is common in real life. He frequently overlaps with Magical Negro in a Blind Seer insight kind of way and/or Handicapped Badass. The characters are more often than not a Ray Charles or Stevie Wonder Expy or parody, and thus tend to be a Blind Musician as well.

The real life source of this is that, in nineteenth and twentieth-century, many blue-collar Americans lost their sight due to poor working conditions, methanol poisoning from bad moonshine, and insufficient medical care, especially for black people, and since most workers in such positions were men, the end-result was a disproportionate number of blind black men. Many who were born blind or lost their sight early were deliberately pushed towards musical training, as one of the few careers available to them that didn't require sight.