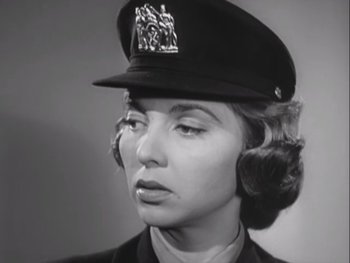 Down the line, you name it and we’ve done it. Today, tomorrow, next week, we’ll pose as hostesses, society girls, models, anything and everything the department asks us to be. There are 249 of us in the Department. We carry two things in common wherever we go - the shield, called a "pottsy", and a .32 revolver. We're New York's finest... we're police women.
Advertisement:

Decoy, also known as Decoy: Police Woman, is an American Police Procedural that aired for 39 episodes in 1957 and 1958. It is the first American drama series to star a woman.

Patricia "Casey" Jones (Beverly Garland) is a member of the NYPD Bureau of Policewomen who often works undercover. Like Joe Friday, she solves a wide variety of crimes instead of being tied to one department.