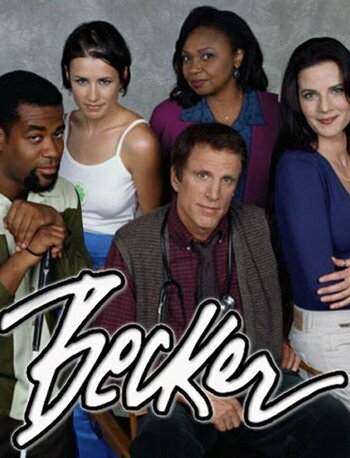 "The world is full of idiots, and someone needs to point it out to them or they will never know."
— Dr. John Becker
Advertisement:

Becker was a Sitcom which ran on CBS from 1998–2004, about an angry, loud, opinionated doctor named John Becker (played by Ted Danson, in his second lead role in a TV series produced by Paramount, after Cheers) with a small practice in the Bronx and a loose group of petty, self-centered "friends", who seemed to be the only people who could actually stand Becker for more than a few moments. Nevertheless he seemed popular with his patients, despite the fact that Becker generally hated people.

At work, head nurse Margaret Wyborn (Hattie Winston) was in charge, and the practice was assisted by Linda (Shawnee Smith), who could be The Ditz but was very popular with the patients. Becker spent most of his time at Reggie's Diner, owned by ex-model Reggie Kostas (Terry Farrell, who also had a pre-existing relationship with Paramount, having starred on Star Trek: Deep Space Nine prior to this series). Other characters included blind newspaper seller Jake Malinak (Alex Désert) and Bob (Saverio Guerra), an annoying old schoolfriend of Reggie's who referred to himself in the third person.

After Season 4, Reggie was suddenly written out of the show after Farrell was fired, and new character Chris Connor (Nancy Travis) took over for the final two seasons. Bob left in Season 6 and was replaced by Hector Lopez (Jorge Garcia).

It will come as no surprise, even to anyone who's never seen the show, that Becker Pets The Dog frequently.