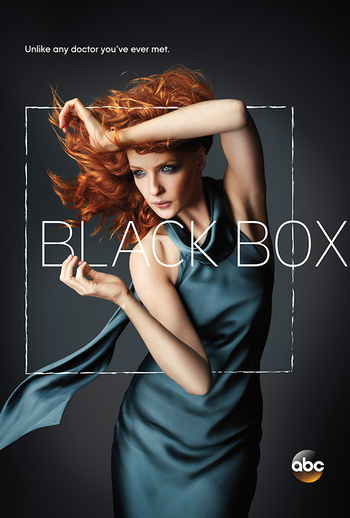 Black Box is a Medical Drama television series that aired for one season (2014) on ABC. It stars Kelly Reilly as Dr. Catherine "Kate" Black, a brilliant neurologist who hides her bipolar disorder and auditory hallucinations in order to keep her job. The series focuses on her professional life, her romantic and family life, and her meetings with her psychiatrist, Dr. Helen Hartramph (Vanessa Redgrave). The series takes its name from Kate's surname as well as "the Cube", the New York City hospital where she and her assistants work.

One major storyline involves Kate's "niece", Esme... who is actually her biological daughter, adopted by Kate's brother in order to give the girl a more normal life. This stems from the fact that Kate and her brother grew up with their bipolar mother, whose manic episodes tortured the kids before their mother's eventual suicide.

The series is notable for having a fairly realistic portrayal of someone with an extreme case of bipolar disorder and how it affects a person's life. In an oddly fitting fashion, the show goes through major Mood Whiplash — going from quirky, comedic cases (such as the episode about a girl with Exploding Head Syndrome and a man who can't get a jingle out of his head) to dramatic and dark storylines (such as Kate being unable to save a woman's child, or a man who nearly kills dozens of people due to a brain tumor.)

Due to the show's abrupt cancellation, its viewers were Left Hanging after a cliffhanger finale.