Film / Three Men and a Baby 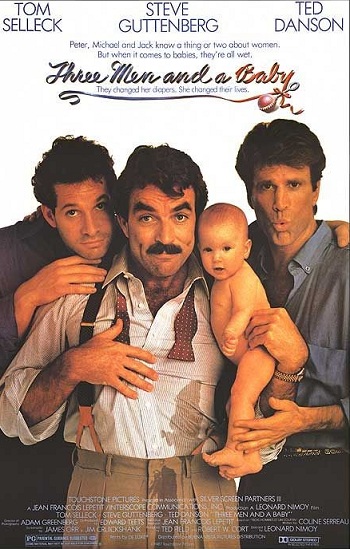 That's really not a safe way to hold a baby, guys.
Advertisement:

It's The '80s. Swinging bachelors Peter (Tom Selleck), Jack (Ted Danson), and Michael (Steve Guttenberg) are close friends and roommates, sharing an apartment and a fondness for the ladies. One day, however, their lives are turned upside down by the arrival of baby Mary on their doorstep, the result of one of Jack's one-night stands. Jack himself is out of the country on a film shoot, so Peter and Michael have to deal with the situation on their own until he comes home. Hilarity Ensues as the men navigate the complicated waters of raising a baby who slowly steals their hearts, while dealing with a bewildering secondary plotline involving heroin dealers.

Directed by Leonard Nimoy and released by Touchstone Pictures, this comedy film is a remake of the 1985 French movie Three Men and a Cradle starring Roland Giraud, Michel Boujenah and André Dussollier. It premiered in 1987 and became the highest-grossing movie of that year in the US. It got a 1990 sequel, Three Men and a Little Lady, set a few years later. Mary's mother Sylvia (Nancy Travis), who joined the men's household at the conclusion of the first film, gets engaged to fellow British thespian Edward, and announces that she and Mary will be moving to England. This is unwelcome news to the men, not only because of their love for Mary but also because Peter is in love with Sylvia.

A third movie with the title "Three Men and a Bride" was announced but appears to be stuck in Development Hell. As of August 2020, a remake starring Zac Efron is also in development for Disney+.

Three Men and a Baby provides examples of the following tropes: