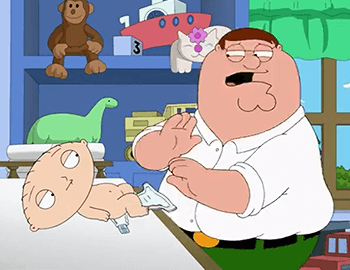 So the Loving Mom or Loving Father has to take off for their job or some other very important mission. Time for the other parent, who is rarely at home to watch the kids. If they are a single parent, maybe it is time to hire the unlikely godfather or uncle or have your friendly coworker, neighbor, sibling, or best friend come over to babysit just for the night. Can also be utilized with teenagers if it's a one off babysitting episode.

If there is a child under the age of three years old, this trope will certainly come into play at some point. Especially if you have a male caregiver taking over. Often involves somebody who doesn't know how to or is inexperienced at changing diapers for comedy. Most often seen in family movies or television shows with infants in the family.

A Tinkle in the Eye will often come into play if the child is a boy. The actual change is usually preceded with a checking of the diaper to see if it needs to be changed.

Donald Duck gets put in a diaper after messing around too much with a Robot Nurse Maid.

Donald Duck gets put in a diaper after messing around too much with a Robot Nurse Maid.