Getting the Baby to Sleep 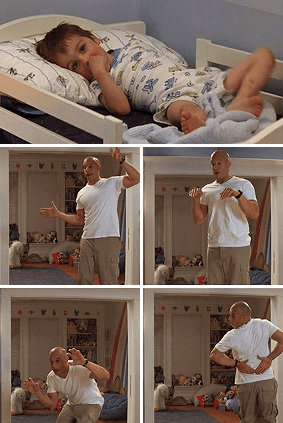 "The cats nestle close to their kittens,
The lambs have laid down with the sheep.
You're cozy and warm in your bed, my dear.
Please go the fuck to sleep."
— Go the Fuck to Sleep
Advertisement:

Babies, they cry a lot. They don't seem to want to sleep much either. In fiction, whenever there is a crying baby there is a parent (or babysitter) at their wit's-end who is prepared to do anything to get the infant to quieten down. And we do mean anything. Often this is something really inappropriate, or at least hilariously out of character. A funny dance, a song you really shouldn't sing to children, strapping the crib to the wing of a 747 jet!! These care-givers are going to try it. They've tried everything else. Often this ridiculous measure is the only thing that will quieten the infant down.

Just how bizarre will, of course, depend on the baseline-reality of the work itself. A wacky and bizarre work filled with egregious violations of common-sense and the laws of physics will naturally have a more outrageous stunt than a work that is mostly realistic. The basic principle will remain, something that goes beyond what the character(s) would normally do, or would be considered sane by the rest of the cast. Please note this isn't just a baby fussing and not sleeping with the parent worrying, there must be the silliness element too.

A Comedy Trope and as such always Played for Laughs, if it is played for anything else it is not this trope. Compare "Getting Ready for Bed" Plot.