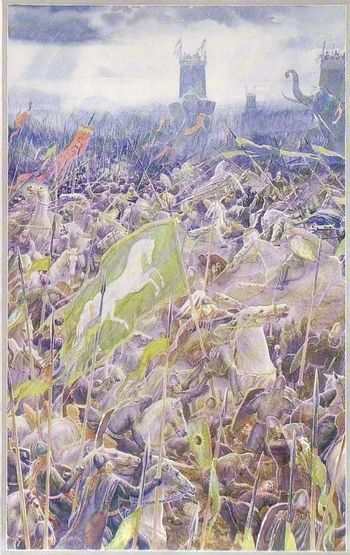 You wouldn't want to be at the business end of those guys.
"And as if in answer there came from far away another note. Horns, horns, horns. In dark Mindolluin's sides they dimly echoed. Great horns of the North wildly blowing. Rohan had come at last."
— The Lord of the Rings: The Return of the King
Advertisement:

Things are looking bleak for our heroes: they gave it their best, and may have even briefly looked like winning, but in the end, the villains were too strong, the heroes too few, and all that's left is just enough time for some last words and a Last Stand...

It's The Cavalry, riding in to save the day! Maybe they're some minor characters who've banded together to mount a rescue, or maybe they're the local Men of Sherwood, or maybe they are characters Not Quite Dead after all, but ultimately they exist to storm in at the last minute, save the heroes and convert a Downer Ending into an out-and-out win for the good guys.

If done badly, this trope represents the ultimate example of the Deus ex Machina. If played well, it can be an immensely satisfying climax to the plot and a nice reminder that the heroes aren't in this alone. In some cases the entire reason for the heroes' heroic stand may be that they know the cavalry is coming, if they can just hold on long enough.

This and other related tropes are named for the classic Western trope of the US cavalry charging over the brow of the hill just in time to save the beleaguered settlers from the Indians in far too many Westerns to count.

When it is specifically a vehicle with heavy firepower, it is also a Gunship Rescue, and when undead forces are used to save the day, it is a Cavalry of the Dead.

The expectations that accompany this trope can be subverted into providing a Hope Spot. The cavalry could turn out to be a Redshirt Army, utterly useless and readily destroyed by the threat. Alternatively, the heroes could find themselves victims of Cavalry Betrayal, where the supposed cavalry are also hostile to the heroes. If it's clear who is supposed to be the cavalry, yet they refuse to help the heroes for some reason, that's a Cavalry Refusal. Both the Betrayal and the Refusal often lead to a Bolivian Army Ending.

Not to be confused with Calvary, a place outside Jerusalem where The Roman Empire performed crucifixions (including Jesus's). Compare Come with Me If You Want to Live — in which the cavalry show up to spirit the hero away rather than to win the battle — and Conveniently Timed Attack from Behind. Occasionally, the cavalry will show up after the heroes have managed to turn around their "hopeless" situation.

The Ending of the End

Just when the Mane Six realize the villains are invulnerable and prepare to face a fiery fate, they are miraculously protected by everypony they've encountered over the course of the show.

The Ending of the End

Just when the Mane Six realize the villains are invulnerable and prepare to face a fiery fate, they are miraculously protected by everypony they've encountered over the course of the show.