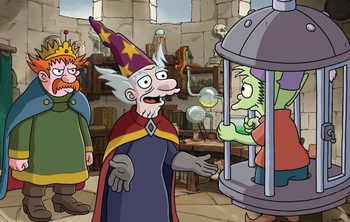 In fantasy series it's fairly common for a king or other high-ranking ruler to keep a magic-user on staff, primarily to provide mystical advice and services, and possibly general wisdom as well. Can also show up in historical fiction or even Real Life, as during time periods when sorcery was widely believed in, having a mage or alchemist on hand was generally seen as a smart idea. The character can be The Good Chancellor, the Evil Chancellor, or anything in-between. Sometimes they're also the Court Jester or the High Priest (if the kingdom's dominant or state religion is or is at least believed to be magical in any way). The mage may also help out during battles, either offering advice or casting spells.

If the character has high standing among other mages as well as the king, they're also The Archmage. If this is common and magic is real and powerful, one may have to ask why wizards don't run things themselves; contrast The Magocracy, Sorcerous Overlord and Benevolent Mage Ruler, where they do. One reason that Arch Mages may prefer to have a king or queen appear to lead (as a Puppet King) is that there are advantages to being the power behind the throne: if a ruler becomes unpopular, a new one can be swapped in.