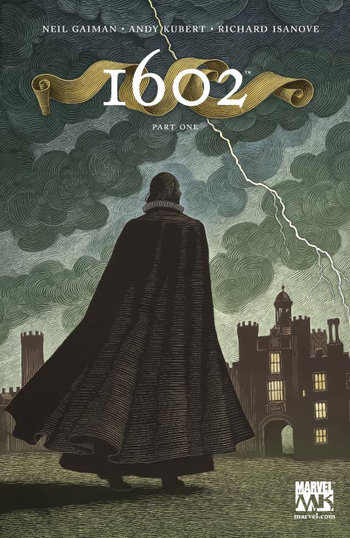 "We live in a time of miracles and wonders and I cannot say that it pleases me."
— Queen Elizabeth
Advertisement:

It is the year 1602, during the reign of Queen Elizabeth the First and all is not well in Merry Olde England. Strange storms have rocked the continent, the sky has been cast in haunting tones, rumour on the street speaks of the end-times and only one man might discover the truth behind these unusual occurrences. He is Doctor Stephen Strange, The Queen's Physician.

Marvel 1602 was an Elseworld miniseries written by Neil Gaiman, transporting the Marvel Universe into the Elizabethan Era. It took heroes such as Nick Fury, The X-Men, Daredevil, Doctor Strange and Spider-Man and found a way to make them work in the period and tell an original tale centering upon them.

The original mini-series has had several follow-ups by other writers, focusing on particular (sets of) characters. 1602: A New World by Greg Pak, which introduces Lord Iron, Fantastick Four 1602 by Peter David, and Spider-Man 1602 by Jeff Parker. There was also a Hulk 1602 story in Hulk: Broken Worlds, a two-issue anthology book about alternate Hulks.

2015's Secret Wars event saw further additions to the 1602 universe, with Lady Kate of Bishop acting as a Robin Hood-type in a Secret Wars Journal story, while Angela received her own Witch Hunter Angela series, which also featured 1602 versions of Bucky Barnes and the Guardians of the Galaxy.

The sequels provide examples of: