Video Game / Knights of the Round 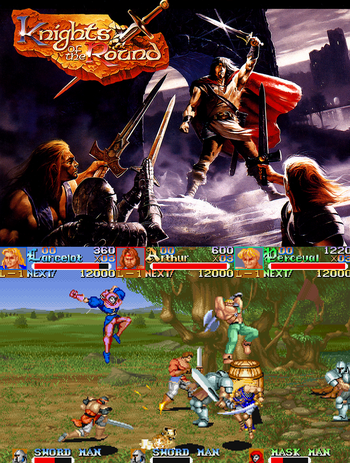 Knights of the Round is a Beat 'em Up Arcade Game released by Capcom in 1991, and later ported to SNES in 1994. It was rerelased on Steam, PlayStation 4, Xbox One and Nintendo Switch in two collections: the Capcom Beat 'Em Up Bundle in 2018, and Capcom Arcade 2nd Stadium in 2022. Much as the name implies, it is loosely inspired by Arthurian Legend. The game is a rather straightforward Beat 'em Up with a level-up system which changes the clothing and looks of the characters and weapons, while increasing their strength and speed. Other game mechanics include the typical special move which drains life, a block action that grants a short invincibility after blocking an attack and the ability to mount horses found on certain stages.
Advertisement:

The story starts out with young Arthur training and finally pulling down Excalibur in the Stone and thus becoming the King of England. However, most knights aren't pleased to find out they must follow this "boy king", and thus rebellion and war break out over the land. Arthur goes to Merlin for advice, and he reveals that only the Holy Grail has the power to unify the war-torn England under his rule. So, he and two of his best friends (Lancelot and Perceval) set out to find it, eventually discovering it is on the possession of an evil knight known as Garibaldi.

There are three playable characters:

The enemy forces are comprised of: