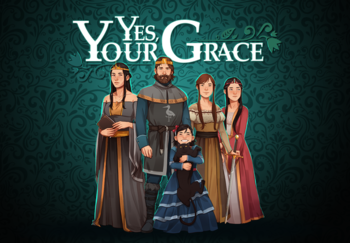 Yes, Your Grace is a kingdom management RPG developed by Brave At Night.

The player takes control of King Eryk of Davern as he finds out that the barbarian nation of Radovia is about to march on his small kingdom, and finds himself in need of an army much bigger than the one he currently has to repel them. In the meantime, he still needs to provide for his kingdom's people and keep his family happy on a very limited treasury and supply of extra food. There are people who are able or willing to help, but rarely entirely out of the goodness of their hearts… provided they are honest about it in the first place.

The game requires the player to find a balance between growing Eryk's army, providing for his kingdom, and preserving his family life, those imperatives sometimes finding themselves at odds with each other. Many of the player's decisions are subject to a Choice-and-Consequence System that has an impact on the options available to them in later parts of the game's plot.