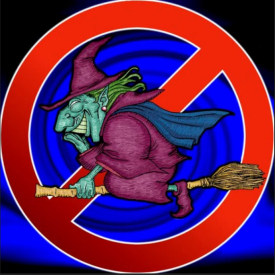 "Also, when Oz first became a fairyland, it harbored several witches and magicians and sorcerers and necromancers, who were scattered in various parts, but most of these had been deprived of their magic powers, and Ozma had issued a royal edict forbidding anyone in her dominions to work magic except Glinda the Good and the Wizard of Oz. Ozma herself, being a real fairy, knew a lot of magic, but she only used it to benefit her subjects."
— The Tin Woodman Of Oz
Advertisement:

A ban on using magic. Usually in effect just for certain places or circumstances, but occasionally is complete.

When an Antimagical Faction is in control, a ban on magic is always in effect, since it is an almost inalienable part of their policy. The ban is often prompted by a notion of magic being evil.

There is more than one sort of magic ban. For purposes of definition, we will divide them into these classes:

Partial bans. As noted, most bans are this sort. Subtypes of this:

Complete bans on magic. Especially fun if the heroes are magic users. Note that many situations that look like a total ban are really a partial ban — you rarely find magic banned to everyone unless there is a non-magical way to enforce the ban.