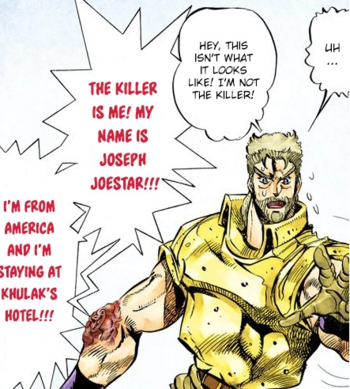 A major crime has been committed and a killer is on the loose. Luckily for the police, someone has come forward confessing to the crime. Unluckily for the police, the person making the confession didn't commit the crime. Sometimes the police will see through the confession and instantly know that the person is lying. Other times, unfortunately, they will buy into the guy's story, derailing their investigation (at least temporarily). In some cases, even after the person's confession is shown to be false, some of the detectives will still go with it.

If the character has a history of confessing to things he didn't do, expect the police to remember him from the last time he made a confession. This could possibly lead to a subversion of this trope when it is later revealed that the "serial confessor" actually did the crime this time.

Taking the Heat is a subtrope. Often the product of the Jack Bauer Interrogation Technique. Compare Insists on Being Suspected.