Fanfic / I'd Trade My Life For Yours 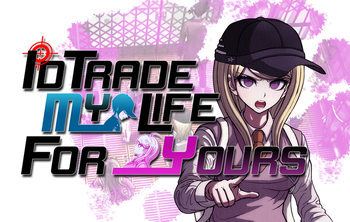 "I'll save everyone, and I'll find the mastermind. It's a promise, Saihara-kun."
Three different sacrifices are made, and three different survivors stumble out of the rubble.
Advertisement:

I'd Trade My Life for Yours

is a Danganronpa Alternate Universe Fic where Shuichi Saihara, the canon protagonist of Danganronpa V3: Killing Harmony, is voted the killer of Chapter 1's trial while Kaede Akamatsu keeps the role of main lead.

Compare Three-Point Shot, in which the ringleader is discovered in the first trial, and System Restore, a Danganronpa 2 fic with a similar premise.

This fanfiction assumes the reader has completed the game. Thus, all spoilers for the actual game will be unmarked.

Tropes in I'd Trade My Life for Yours include: