Alone with the Psycho 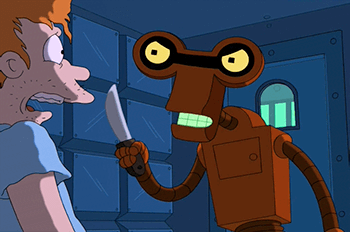 What's the matter? YOU SCARED!?
The young police officer goes to visit the house of one of the suspects in a Serial Killer case. Meanwhile, back at the police station, the detectives put together the clues to see who the killer is.

Simultaneously, the two parties figure out the truth — the detectives through the DNA test, the officer through finding the Torture Cellar or the Room Full of Crazy. The suspect is the Serial Killer. (If the officer doesn't find the lair, then at the very moment the detectives figure it out, the suspect — having pulled the wool over everyone's eyes up to now — will suddenly start acting like a serial killer.) The detectives try to contact them, but their mobile isn't working properly.

They're alone in the house with a serial killer. Will they survive? The answer to that is generally "yes", although The Cavalry almost certainly won't arrive until the very nick of time.

The killer may take the opportunity to engage in some Evil Gloating, probably involving I Have You Now, My Pretty. If the would-be victim is feeling gutsy, she may respond with Shut Up, Hannibal!

The house-visitor is most often female and attractive, although there have been male examples.

Compare Exposition Victim and Consulting a Convicted Killer. See also The Calls Are Coming from Inside the House.

Fan Works
Film — Animated
Film — Live-Action
Literature
"There is no lane so vile that the scream of a tortured child, or the thud of a drunkard's blow, does not beget sympathy and indignation among the neighbors, and then the whole machinery of justice is ever so close that a word of complaint can set it going, and there is but a step between the crime and the dock. But look at these lonely houses, each in its own fields ... Think of the deeds of hellish cruelty, the hidden wickedness which may go on, year in, year out, in such places, and none the wiser."
Live-Action TV
Theatre
Video Games
Visual Novels
Webcomics
Web Original
Western Animation
Real Life