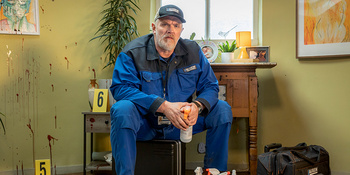 The Cleaner is a BBC One Black Comedy which first aired in 2021. A Foreign Remake of the German comedy Der Tatortreiniger, it stars Greg Davies as Paul "Wicky" Wickstead, a professional crime scene cleaner who works for the Shropshire-based cleaning service Lausen. Each episode is about what happens when he goes to clean up a place where someone has died. While trying to clean up, he encounters people related to the victim — their employers, their neighbours and sometimes even their murderers.

The entire first series was made available at once on the BBC iPlayer, and a Christmas Special aired on 23rd December, 2022.

The show is not to be confused with the 2008 A&E series The Cleaner, or the trope of a similar name that this show uses as its framing device.