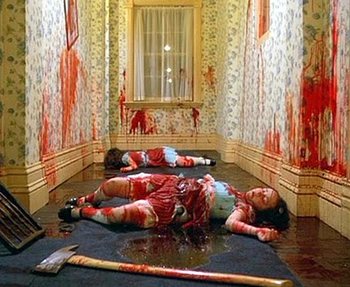 A staple of the horror genre. Blood is a primal fear, which makes it, and other things you'd usually like to keep in your body, ripe for scaring people in fiction. If someone is bleeding out, you know they've been attacked or are in danger of dying, and when there's blood pooling somewhere there really shouldn't be, you know it's no longer safe there.

There are many ways blood can invoke fear. Haunting stories sometimes have blood supernaturally "bleeding" and dripping down/out from furniture, and architecture, for unnaturalness and creepiness. Blood can also signify danger is nearby, and that somebody was wounded, or worse, killed. Murder mysteries with horror elements have gory murders specifically for this reason, some going beyond just blood, and showing the victim's internal organs or separated body parts. Finally, blood and gore are very often used to show that a character's health is declining, which makes this trope very common in Medical Dramas and/or when the audience is supposed to fear for someone's life.

There's no question, psychologically, why this is the case. The fears of blood and death are very common, and most people like to keep their blood inside their body, and the rest of their body intact. Because bloody horror is often seen as too scary for young children, kids' shows tend to use Symbolic Blood, feature blood in non-standard colors, when they're not just using Bloodless Carnage.

This trope is the reason why Blood-Splattered Innocents, Blood Is the New Black and Blood-Splattered Wedding Dress are so scary, and why Evil Is Visceral. Blood from the Mouth is often combined with Incurable Cough of Death to induce horror. And then there's the Logical Extreme of Blood from Every Orifice.

Since this has a lot of overlap with Death Tropes, and thus is ripe with spoilers, spoilers will be unmarked.

A Sub-Trope to Horror and Body Horror, and a Super-Trope to Splatter Horror. Related to Overdrawn at the Blood Bank, High-Pressure Blood, Evil Is Visceral, and Afraid of Blood which is about specific characters that freak out at even minor sights of blood like paper cuts and donor blood packs. Some Subtropes are Blood-Splattered Innocents, Blood-Splattered Wedding Dress, Blood Is the New Black, and Couldn't Find a Pen. Chest Burster is a variation. Compare Paint the Town Red and Symbolic Blood. Also see Blood Magic for when blood is used for magic by ritualistic sacrifice. Contrast Bloody Hilarious, where blood is played for Black Comedy; Bloodless Carnage, where scenes where characters would normally bleed are censored to be less scary; and Gorn, where blood is also part of the aesthetic, but it's meant to be exciting, not scary.

See Did Not Do the Bloody Research for the use "bloody" as a curse word. Compare A Bloody Mess when the horror turns out to be a false alarm—it was just an innocent substance.