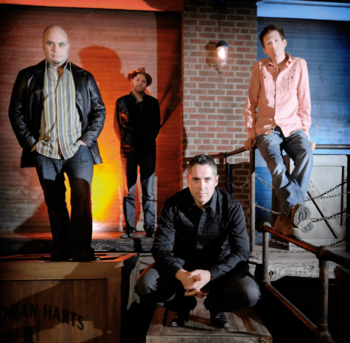 Wait a minute. This isn't what I came here for. note  The current lineup. L-R: Tyler Stewart (drums/vocals), Kevin Hearn (Keyboards/guitar/vocals), Ed Robertson (Lead vocals/guitar), Jim Creeggan (bass/vocals).
"At the height of the grunge revolution, we were strumming on our old banjos and singing about macaroni. It felt like we were the ones being daring."
— Steven Page, former lead singer, on the band's song "Alternative Girlfriend"
Advertisement:

Barenaked Ladies, frequently abbreviated BnL (no, not that one), are a Canadian alternative rock band formed in 1988. When they hit it big, they did it with a quirky style that could convey alternatively humour or heartbreak at will. In doing so, they redefined what Canadian popular music could be, and showed that Canada never needed to copy any other culture.

They got their name when founding members Ed Robertson and Steven Page were discussing names for a band during a Bob Dylan concert; when they went to sign up for a music competition shortly thereafter, and realised they needed to come up with a band name on the spot, they panicked and the rest is history.

Although their first hit song was a dynamite cover of Bruce Cockburn's "Lovers in a Dangerous Time," they soon began making considerable waves with their own creations with a cheap independently produced demo tape, called The Yellow Tape, that was rejected by all the music labels. With nothing else to do with it, the band started selling copies at their concerts and it caught on like wildfire until it hit national Platinum sales status (100,000), the first ever indie label to do so in Canada. They're mostly known for sometimes intelligently snarky, sometimes just plain goofy lyrics, a tendency to improvise, and a light-hearted stage show combining all of the above.

Once banned by city bureaucrats note  Popular memory attaches the story to mayor June Rowlands, but she wasn't even in the city at the time the decision was announced from playing at a New Year's venue in their native Toronto due to their "obscene" name, they were later given the key to the city. There's a message in there somewhere.

The line-up has changed thrice, with Andy Creeggan leaving prior to the recording of Born On a Pirate Ship, Kevin Hearn arriving after said recording (but before the release), and Steven Page leaving the group for a solo career in 2009. The current band consists of: