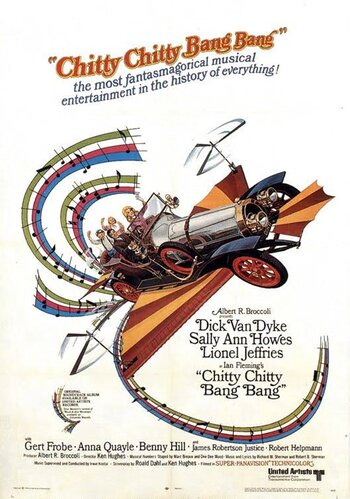 Having noted the success of Disney's 1964 Edwardian Era musical film Mary Poppins, four years later United Artists sought to generate similar success for themselves by hiring The Sherman Brothers, the same song-writing team that had scored Poppins, to adapt another period piece into a big-budget musical extravaganza. The result was Chitty Chitty Bang Bang.

Sometime in the 1910s, the widowed English inventor Caractacus Potts (portrayed, with an American accent, by Dick Van Dyke) rebuilds an old wreck of a racecar—which he names "Chitty Chitty Bang Bang", for the noise its engine makes—and adds a few slight improvements, such as giving it the ability to sail and to fly. During an excursion in the car with his two children, Jeremy and Jemima, and an attractive woman named Truly Scrumptious (Sally Ann Howes), whose father is the wealthy owner of the local candy factory, Caractacus entertains them with a story.

It seems that Baron Bomburst, the tyrannical ruler of the vaguely mitteleuropäisch land of Vulgaria, has seen Chitty and covets the car for himself. After his father is kidnapped by the Baron's forces, Caractacus, his kids, and Miss Scrumptious all travel to Vulgaria,note Location shooting for the film version was done around the Bavarian castle of Neuschwanstein and in the medieval town of Rothenburg-ob-der-Tauber where they get into various misadventures. Hilarity Ensues.

The book it's based on was written by Ian Fleming. Yes, that Ian Fleming. The movie itself was produced by Albert R. Broccoli, of the same fame (though not produced by Eon Productions this time around). Additionally, Gert Fröbe (who'd played Auric Goldfinger) appeared as Baron Bumburst, while Desmond Llewelyn (aka Q) played Coggins. The screenwriter was Roald Dahl (who, to continue the Bond Production Posse, also wrote the screenplay to You Only Live Twice). And Benny Hill was the Toymaker.

The titular car was owned by one of the film's drivers, Peter Picton (aka Pierre the Clown), who died in November 2016. The vehicle is now owned by Peter Jackson.