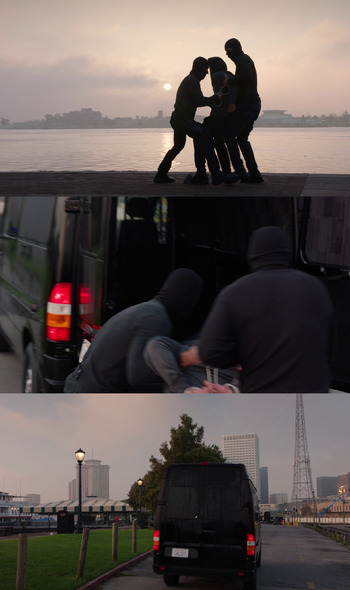 We've all seen it before: a van drives up and skids to a sudden stop in the middle of the street. A bunch of Faceless Goons in black sweaters and balaclavas pile out the side and grab someone (usually a businessman, politician, top scientist or engineer, or just The Hero), stuff them in the back, then drive off.

The kidnappers will throw a Bag of Kidnapping over the target's head if they have no intention of speaking with them until they reach their destination, or else employ Instant Sedation or a simple Tap on the Head if they really don't want to talk. Alternatively, a No-Holds-Barred Beatdown or Cold-Blooded Torture will sometimes ensue as soon as the door slams shut, possibly as a form of enhanced interrogation, after which the ringleader, if present, usually follows up with a Motive Rant, an attempt to Break Them by Talking, or just an offhand mention that it would be a Shame If Something Happened to the kidnapped and their loved ones should they fail to cooperate. After learning what they wanted to know or saying what they wanted to say, the victim's captors may simply dump them out in the middle of the road and speed away.

This doesn't have to be a van, but not many other vehicles combine the same degree of interior space and outward anonymity. The number of goons can also vary, though it's difficult for one person to do this when they also have to drive the van. While the victim is usually right out on the sidewalk, sometimes the kidnappers will enter or break into a building to grab their targets. A common variant is for kidnappers to ambush their target right by the exit of a building, possibly holding them at gunpoint or shocking them with Static Stun Guns, then briskly escorting them to a van waiting just outside, thus limiting their exposure.

Part of the trope is a certain Refuge in Audacity — people aren't expecting to be kidnapped in broad daylight in front of witnesses, the latter of which may be restrained, sedated, or even killed. The van provides the element of surprise and helps the kidnappers disappear after the attack but during the abduction, stealth tends to be a secondary concern to speed and taking the target and any protection they may have off guard.

Common among Human Traffickers. Compare and contrast Van in Black for suspicious vans in general, Spies in a Van for when the viewpoint is that of the police surveillance or espionage team inside the van, or Punk in the Trunk for less spacious kidnapping accommodations. May sometimes occur when dealing with a Creepy Stalker Van, though that typically involves a very different kind of kidnapper (usually a lone stalker or Serial Killer) who generally prefers to take their victims quietly and drag them back to the van after the fact, or else lure in kids with candy.

Nabbed in the night

A South Asian man in London's been snatched off the streets by a bunch of men in balaclavas.

Nabbed in the night

A South Asian man in London's been snatched off the streets by a bunch of men in balaclavas.