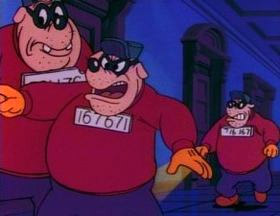 Beagle Boys bungle burglaries bearing bright, blatantly bad boy baggage.
"Just then, a bank robber ran by. Sparky knew he was a bank robber because he was wearing what bank robbers always wear: a mask, a striped shirt, and shoes that were good for running."
— Tom Tomorrow, The Very Silly Mayor
Advertisement:

A burglar so committed to his job that his clothes scream "ARREST ME NOW."

The type of clothing a Blatant Burglar wears varies by work and sometimes by region:

According to The Other Wiki, the striped-shirt burglar originated in the 1977 book Burglar Bill. Another theory is that the disruptive striped pattern enabled the wearer to hide themselves in the tall grasses of the savannah.

Subtrope of Malevolent Masked Men, Stock Costume Traits and all too often, Obviously Evil. A Rascally Raccoon may be this due to how a raccoon looks. Highly-Visible Ninja, Institutional Apparel, Conspicuous Trenchcoat, and Highly-Conspicuous Uniform are related tropes. Mostly a Dead Horse Trope, if it was ever taken seriously.