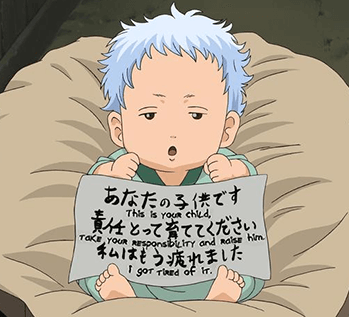 Ding ding ding! UPS here! Yes, can I get you to sign off on this baby, sir?
"I went out to the back, where my vegetables had just been delivered. There were cabbages, turnips, radishes... only there were no radishes. Just a very hungry baby panda."
— Mr. Ping, Kung Fu Panda 2

It's raining, and a mother is carrying a baby in a basket. The baby is wrapped up in a blanket, but is obviously a main character. The mother may or may not be kept anonymous by a cloak.

So the mother goes up to a doorstep, puts the baby down, may or may not add a letter and/or an Orphan's Plot Trinket, rings the doorbell and slips quietly into the night. The door is opened by the child's adoptive parents, who are (usually) fully accepting of the baby and their new roles as parents instead of contacting the authorities (and it just so happens that someone is always home and awake to answer the door, thus sparing the baby from dying of exposure). Cut to several years later...

This title is a pun on Doorstep Baby, and is not to be confused using a baby as a doorstop. For that, you're looking for Hilariously Abusive Childhood or Human Doorstop.

Lead-in to Moses in the Bulrushes and Muggle Foster Parents. The pet version is Abandoned Pet in a Box. A dwarf criminal may exploit this trope by pulling a Goo Goo Getup.

Take Care of My Child

A bat baby is found in this fashion, with a note from the Bat Queen telling Eda that she'll be paid well for babysitting the child for the day.

Take Care of My Child

A bat baby is found in this fashion, with a note from the Bat Queen telling Eda that she'll be paid well for babysitting the child for the day.